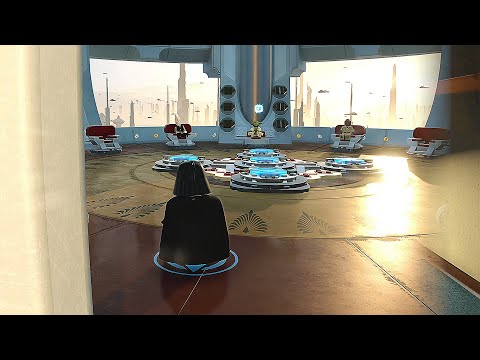 By collecting the 5 minikits in Revelations! You will unlock the X-Wing rebellus (micro).

There is a switch in the second area in which you fall, after the first fight with Vader, press the switch and take a minikit from the machine on the ground.

Choose one of the two side tunnels to follow Darth Vader after reaching the second area. You will reach the same room in any way, then you will go back through the tunnel of the middle that he took. Grab the node on the roof and a minikit falls.

After going down two sets of tunnels, you will be in a room with a Terminal Protocol Droid. Use a droid on it and press alarm (the only option) and unlock the minikit in the center of the room, on the machine with the neon blue tubes around.

After being sucked by the window towards the platform below, after your second combat with Vader, there is a Hero terminal on the left side. Use it and unlock a minikit hidden on the wall.

While Darth Vader hides from you, the second time, after you fall out the window, one of the small rooms that you can open is full of layers of Lando. There is also a picture of him in the back of the room, he turns it away and you will get your last minikit. Destroying the layers is optional but recommended.

At the end of Apocalypse! Unlock the following characters for completing the level for the first time:

* Episode level guides IX: The Rise of Skywalker
* A jump guide and jump level
* They fly! Level Guide
* C-3P-OH without level guide
* The guide of the force level to do it